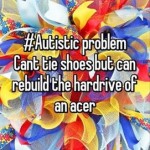 Autistica is a UK based reasearch charity.       Click icon for their website and scroll down to see their current research projects.      Their research priorities are about improving life for people on the spectrum.

Brain Bank for Autism is based at Oxford University.         Click icon for for their brochure, published in 2013.       The large icons on the university Neuropathology page seem to suggest that autism brain tissue research may not currently be active, as of 2022.

The Cambridge Neuroscience website projects an image of a hive of activity.        Their Autism Research Centre aims to understand the biomedical causes of autism.        They have published a Short History of neuroscience at Cambridge.

Is ADHD a Spectrum Disorder?

New research suggests that ADHD has a number of subgroups.        All of them are associated with a weak connection in the brain’s neural networks.        This article describes how, according to Joel Nigg, Ph.D, they affect children with ADHD and how the brain matures.

Oxford associate professor has a new interpretation of autism distinguishing it from alexithymia.       He says that autistic people can have empathy and non-autistic people can lack it.        He also says that the two conditions are completely independent of each other.       Click icon for article.

A specific research programme at the University of Manchester, UK.        Six years after parents were trained to understand and interact with their preschool children better, researchers observed improvements.

An autistic child may not interact with his or her parents at all.       In this trial, when a child eventually did offer a toy or made a noise that could be interpreted as a request, the incident was played back on video and the parent encouraged to respond.       Parents parcticed what they had lerned at home every day.       Click icon for article.

Overlap between ADHD and Autism

Click icon for an introduction.       For a more thorough treatment see this article.

Until as late as 2013 a joint diagnosis of autism and attention deficit hyperactivity disorder (ADHD) was not permitted by the most influential psychiatric handbook.       But both conditions are increasingly found to occur together.       In addition mechanisms in the brain that are involved in the overlap of these conditions have been identified.

There’s such a thing as “autism camouflaging” and it might explain why some people are diagnosed so late.       Across the whole sample, higher camouflaging scores were associated with higher levels of depression, but not anxiety.            Click icon for article.

Scientists have discovered what appears to be a fundamental reason why people are dyslexic based on MRI scans.       What is particularly interesting is that better reading skills in adults and children with dyslexia were associated with greater repetition-induced neural adaptation,        Click icon to view article.

People with autism make more logical decisions, study suggests.       ‘Listening to your heart and being in touch with your emotions – usually seen as positive things – may lead to decisions that are not so rational’.       See  article.

How close are we to solving the puzzle?      Here is a TV documentary featuring comment from experts in the field.      It was uploaded in 2011 and lasts 15 minutes.

Is there an autism epidemic?

The short answer is no.       What is more, the autism epidemic myth has had damaging consequences.       Here is one paediatrician’s explanation.

Mothers on the spectrum

This is a study released in Baltimore, USA, comparing the experiences of autistic mothers with typical mothers.       It specifies additional difficulties that autistic mothers face.      See study for more information.

A new study adds an intriguing, unexpected, and sure-to-be controversial finding to the mix:       It suggests the brains of children with autism contain small patches where the normally ordered arrangement of neurons in the cerebral cortex is disrupted.      “We’ve found locations where there appears to be a failure of normal development,”  said Eric Courchesne, a neuroscientist at the University of California.       See article.

Some people say that fish oils help to reduce the symptoms of Attention Deficit Hyperactivity Disorder (ADHD).       Unfortunately, independent scientists seem to say that it does not benefit all children with ADHD.      They say it may benefit a particular group of children who ‘are highly oppositional, especially if their normal blood levels of EPA are low’.      See Fish Oil and ADHD: What is The Evidence? under the heading:  Summary and implications.       Even then, they say that more research is needed to be sure.

“Children with autism who take part in drama and performance activities may be able to improve their communication and interpersonal skills, a study has found.”       See newspaper article.

According to his website he was, A physician, best-selling author, and professor of neurology.      He contributed quite a bit to the scientific understanding of the nature of autism.

For the book worms amongst us Awakenings might make for an interesting and uplifting read.      This is an account of a group of patients who were woken from sleeping sickness in 1969 by Dr Sacks using a drug that was new at the time.      See also   Library record.

Do complications during birth cause autism?

The science is not as clear or as simple as that and research is still at an early stage.