There are some fine examples of model railways in the UK.       We have links to three of them here. 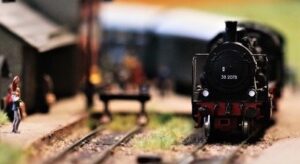 The first is  a model railway layout based on the North Yorkshire market town of Knaresborough.      It was set around the time of 2005-15.       Click play button for a video tour.

Here is a layout set in 1949, in the age of steam.       It puts us in the fictional town of Langley,       The railway station is on a branch line of the Great Western Railway (GWR) which recently had recently been nationalised and become part of British Railways.

This is a fictional 1980s diesel depot on the West Highland line in Scotland.       It uses a digital command control system, which means smoother running at low speeds and the ability to control engines independently on the same stretch of track.     The sound effects you hear on the video are produced by this system too.

The examples shown above may seem out of reach for most of us.       Model Railway UK is a down to earth Youtube channel charting work in progress on a couple of layouts.