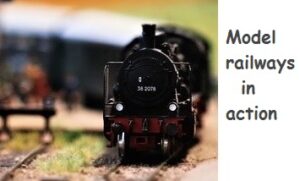 Before computer games were invented, one thing that boys used to do was to create a model railway.      Fathers might set up a board and lay some track to get them started.      OO scale was the most popular, with the smaller and more compact N gauge gaining in popularity later on.

Here are video clips of a few of the best model railways in the UK.      Click icon to have a look. Taylor Swift was declared Artist of the decade by the American Music Awards in 2019.      Click page icon for a rundown of her most iconic songs.

On her Folklore album there are three teenage love triangle songs.      They are written from the viewpoint of each of the characters involved.        See article.

Rachel Platten is an Americal singer from Boston,, Massachusetts.      She used to visit London with her family some years back and has performed there.      It took a while for her career to take off, but after years of trying her fans connected with her Fight song.

Click play button for the video.      It illustrates her real-life struggle: performing in New York bars, trying to write a song that would capture the public imagination.       See article from 2016. Some people might think that the Covid-19 vaccine research and development started when the pandemic began in early 2020.      In fact, following the Ebola outbreak of 2014-2016, scientists at Oxford University started preparing for the next big outbreak – not knowing what it would be.

They took a common cold virus that infected chimpanzees and engineered it to become the building block of a vaccine against almost anything.      You could think of it as a smart, microscopic postman.      All the scientists have to do is change the package.

Fortunately, by 2020, they knew quite a bit about the Coronavirus family of viruses.      Also, they had already developed this kind of vaccine for Mers, another version of Coronavirus.       Once animal trials had shown the vaccine was safe, the researchers were able to begin human trials on 23rd April.